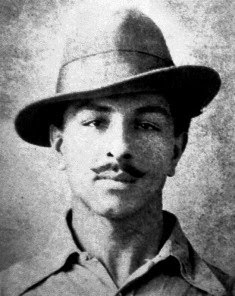 This very day in 1931, Indian freedom fighter Bhagat Singh and his companions Rajguru and Sukhdev were hanged by the then British Administrators. Bhagat Singh was an inspiration for a generation and was considered to be the first and formost of revolutionaries who propogated socialism and communism in India. The nation Salutes you for your selfless life and sacrifice!!!
10 interesting and unknown facts about Bhagat Singh:-
1. Singh was a great actor in college and took part in several plays. His acting in 'Rana Pratap', 'Samrat Chandra...gupta' and 'Bharata-durdasha' earned him praise from his teachers and classmates.
2. The day after the Jalianwala Bagh incident, Singh slipped away from school, went straight to the place of the tragedy and collected a bottle of mud wet with blood of Indians. He was 12 at the time. He used to worship the bottle every day.
3. As a child, Singh often spoke of “growing guns in the fields” so that he could fight the British.
4. He ran away from home to escape an early marriage. Even at the age of eight he told his classmates "is marriage a big achievement? Anybody can marry. But I will drive the British out of India."
5. The October revolution led by Lenin attracted Bhagat Singh and he started to read literature about socialism and socialist revolution at an early age.
6. Singh said: “They may kill me, but they cannot kill my ideas. They can crush my body, but they will not be able to crush my spirit.” This was to be quoted many times over by revolutionaries after Singh’s death.
7. The bombs Bhagat Singh and his associates threw in the Central Assembly in Delhi were made from low grade explosives. They were lobbed away from people in the corridors of the building and were meant only to startle and not harm. The British investigation into the incident and forensics report also confirmed this.
8. During his stay in prison in 1930, Bhagat Singh coined the word “political prisoner” and demanded he and his comrades be given basic amenities that even British looters and goons in the jail were entitled to.
9. He coined the phrase 'Inquilab Zindabad' that became the slogan of the India’s armed freedom struggle.
10. Singh was hanged an hour ahead of the official time when the death sentence was to be commuted and was secretly cremated on the banks of the river Sutlej by jail authorities. However, thousands of people on hearing the news gathered at the spot and took out a procession with his ashes.
To know more about Bhagat Singh...Click here..
(pic and info taken from net)*
Posted by Greener Bangalore at 4:33 PM 1 comments

Vithiri resort is one of the most exquisite Eco-friendly resorts in India. Draped in the lush green tropical rainforest of Wayanad, north-western Kerala, Vithiri is a butterfly placed on the palm of nature. Have a look @ this beautiful VDO shot by Tito Sunny and team.

Email ThisBlogThis!Share to TwitterShare to FacebookShare to Pinterest
Labels: India Tourism, kerala tourism, Tito Sunny, Vithiri resort
Newer Posts Older Posts Home
Subscribe to: Posts (Atom)
Indolence is a delightful but distressing state; we must be doing something to be happy. Action is no less necessary than thought to the instinctive tendencies of the human frame.