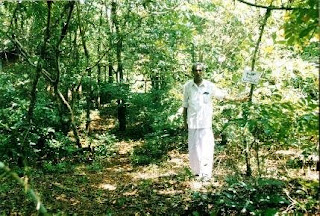 Let me introduce Abdul Kareem, who hails from a small sleepy town called Kasargod, Kerala. He is a distinguished nature lover and a small time travel agent in the early 1970's. Right from his childhood he was passionate about KAAVU or SACRED GROOVES that every small village had one in those days.

In the early 70’s he often visit and spend weekends, in a nearby village where he walked around with his girl (later became his wife). And thus he noticed this barren land in this village. The barren hill sides was a painful site for Kareem, a nature lover and the passion for the sacred groove grew even bigger at this pathetic sight. 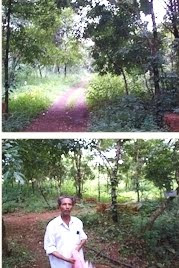 He had a plan. He bought some barren land. He planted mature saplings of wild trees in spaces between laterite rocks and initially ferried water from about a kilometer from the nearby village in a bicycle. He continued this for many summers. People around him started laughing at him for this crazy act and excessive spending of time and money on a piece of barren land back then in mid 1970’s.

"In the third year, when my plantation was but of young adult trees, the water level in the well rose!' he says.”That itself seemed an end for me and I began to plant the whole extent in frenzy." He bought more land and spend money on amenities. 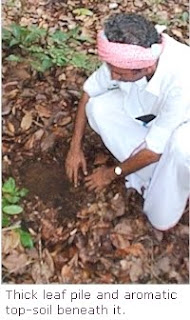 He planted a range of wild trees and let nature took over and the rest is history. Birds started making nests, lot of reptiles and small creatures grew up happily. Even wild squirrels, rabbits, howls, mongoose and wild hens had colonized here. He also planning to bring in deer. Weeds grew with rare herbs and medicinal plants. He let the jungle grow naturally and never used insecticides or fertilizers. He trusted in the nature’s capability to grow without human intervention. He kept on adding land and planted more trees and the area is grown to a lush forest spread in more than 5 acres.

These varieties are not planted consciously by Kareem, but Nature did the magic through birds. But yes, Kareem had just kick started and Nature took over. Water levels in the nearby areas and villages within a 10km radius went up unbelievably high. 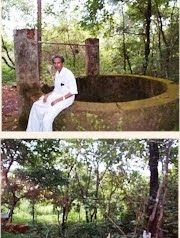 After 30 years now, today Kareem’s forest is a haven of nature-lovers, botany students, researchers and environmentalists, is also home to 1500 medicinal plants, 2000 varieties of trees, rare migrating birds, small animals and insects. He is been honored by various organizations and NGO’s including United Nations for his priceless and selfless act.

Agricultural scientist, MS Swaminathan, has called the forest a "wonderful example of the power harmony with nature." 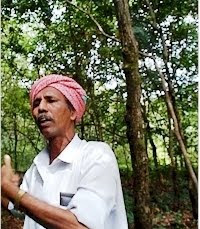 In an interview he said "I wanted to spread the message that if trees, animals and birds survive, only then human beings have a future,"

The people who laughed at him 30 years back, now consider Kareem a blessing not just for the village village but a role model for the entire nation. 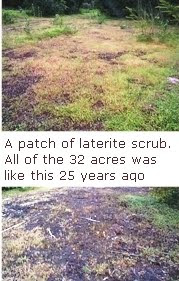 All we need is just a thought for a clean and green future and a mind to kick-start; then things will fall in line.

Great Job mister Kareem and more Kareems are need of the hour to ensure a Greener Tomorrow!
Posted by Greener Bangalore at 12:55 PM 16 comments 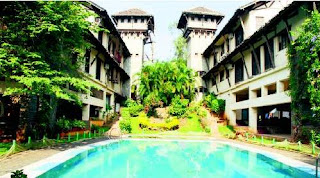 The proud owner of this castle, Jyotin Gandhi an entrepreneur who is into mining and exports is from the Gandhi Family of Hubli, Karnataka (around 400 km from Bangalore).

A businessman and a nature lover! That’s one deadly combination and a rare breed to find, built his mansion on a total area of 90,000 sqft or two acres, with built-up area just about 10% of the total land.

90% area is flooded with lush green trees and lovely plants, two ponds with lotus flowers, ducks, frogs, birds and a lot of other pets around makes this place almost a dense jungle.

Jyotin Gandhi says he loved the woods and hence chooses this place near the woods. The architecture is so finely looked into and the abundance of light and air is utilized to its max, in such a way that usage of fans and lights are minimal during day time.

A few specialties like Howdah converted into a tea table; a Terracotta door from Rajasthan, a century-old horse cart that has a built-in jewel box, shows his interest for antiques. A world traveler he has a large collection of various artifacts from across the globe which includes a wall-mounted coffee grinder from Brazil. 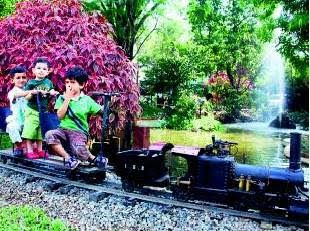 His grand-kids enjoy a ride on the toy train that has a live steam engine running on coal though the engine takes an hour to fire. To add-up there are two circular tracks, a miniature railway station and two railway over bridges

“The houses look like stone castles. They are structures of stone, wood and burnt mud tiles, surrounded by gardens. The all weather mansions have long wind tunnels and towers to flush in cool, fresh air. The houses have wood flooring and roofing. The houses are built on a small piece of a huge site. The rest of the site is a large, natural garden. Apart from handpicked species of plants, the garden has ducks and pigeons that move around the fountains and ponds” - TOI

As usual TOI has come up with this lovely piece of article which I thought will share with you all. A neat and creative write-up by Rishikesh Bahadur Desai from Times News Network

(info and pic from TOI)*
Posted by Greener Bangalore at 7:40 PM 3 comments 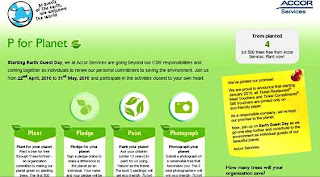 Accor Services is back again with Earth Guest Day Celebrations/Pledge/Campaign and other awareness programs. As an active participant every year, responsible and committed corporate, our organization has shared a few valuable information, with our employees through our internal system. Since its generic I would like to share with you all.

You can also participate here

The principle: organize collective actions around the eight priorities of the Earth Guest program.

The point is to organize actions that can have a long-term impact, and not only a one-day action: that's what sustainable development is all about!

The date has not been randomly chosen: every April 22nd, it is the International Earth day.

Today, the Earth day is the most popular and biggest amongst other similar events in the world. It is celebrated in 184 participating countries by more than 500 million people.

These three editions have demonstrated the enthusiasm and commitment of employees for sustainable development.

The number of human beings on Earth continues to grow. In fact, compared to 40 years ago:
- there are twice as many people on the planet,
- humanity is three times richer. This wealth is very unevenly distributed, but the richest populations consume more resources than the others.

But the planet is not expandable, its resources are limited. And this increasingly large population needs to consume increasingly large amounts to sustain itself! To the point where the resources can barely renew themselves. The land is growing poorer and becoming infertile, oceans are being emptied of some species of fish, forested areas across the world are diminishing, water tables and freshwater reservoirs are drying out... More sustainable forms of management must therefore be found and implemented, whether in agriculture, fishing or forestry.

One of the most important consumptions, which continues to rise without faltering, is energy. But 80% of this energy is obtained from natural reserves of oil, coal and gas. These reserves are not renewable (because it took millions of years to create them).
It is therefore necessary to use these resources less, by changing our habits, using more energy-efficient equipment, and developing sources of renewable energy.

In addition, product consumption entails a booming rise in the quantity of waste produced: this quantity rose by 50% in 20 years, and only 10% of the waste is recycled. Consequences? Waste is decomposing in nature, polluting the land and water tables.

Shashi Tharoor a creative author, journalist, columnist and human rights advocate, shot to fame recently for all the wrong reasons connected with IPL the Indian version of English Premier League. And he quit his position of Minister of State for External Affairs last week. Former United Nations Under-Secretary General for Communications and Public Information, he was also a strong contender in the Election for Secretary-General of the United Nations with Ban Ki-moon. Have a look at his chat on the TED Talks

Bangalore being a former cantonment during the British rule has many things in store. Many age old bungalows, historical monuments, palaces of Tippu Sultan and so on. 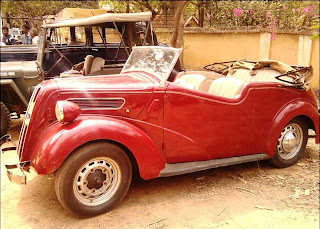 Like every year, last week a Vintage car rally was organized by Value Designbuild (VDB) to raise Funds for Whitefield Club, a recreation club built in 1895 in a plot donated by Greenham to make residents get together, engage in cultural, literary and social activities. 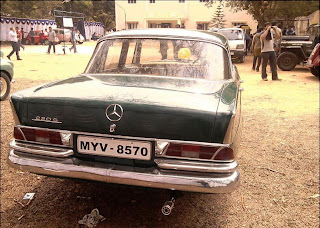 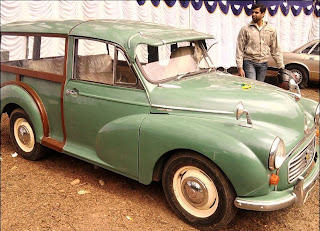 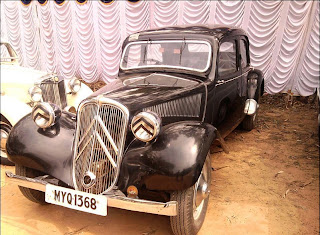 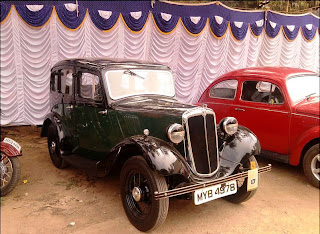 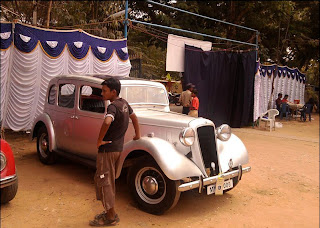 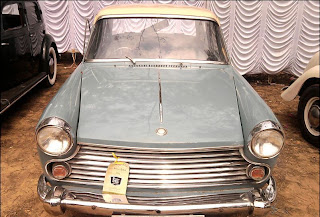 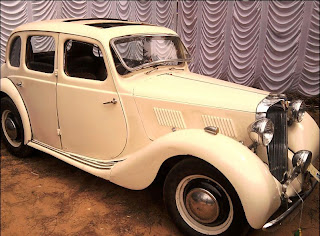 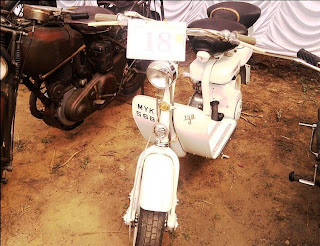 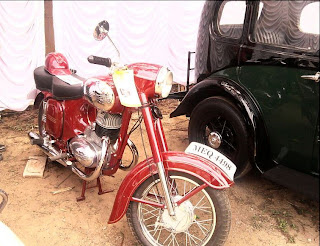 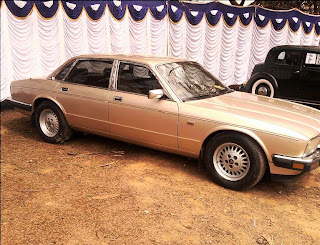 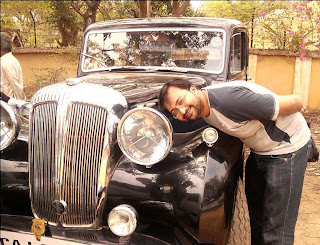 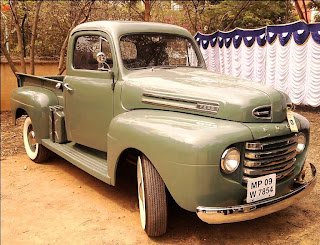 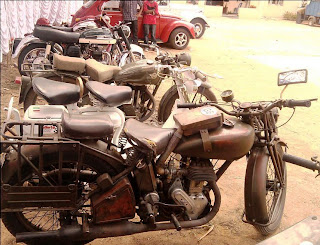 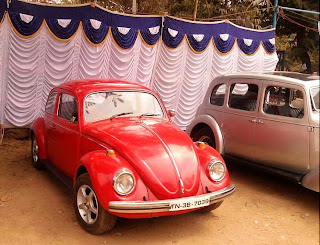 (pics taken from net)*
Posted by Greener Bangalore at 9:58 AM 3 comments

Wishing you all a HAPPY VISHU


Posted by Greener Bangalore at 9:57 AM 2 comments

Just cant stop sharing this with you all!!! Have a look at this amazing Lion!

(VDO from net)*
Posted by Greener Bangalore at 8:01 AM 3 comments

Email ThisBlogThis!Share to TwitterShare to FacebookShare to Pinterest
Labels: Animal Love, Animal Protection, Christian the Lion, Love
Newer Posts Older Posts Home
Subscribe to: Posts (Atom)
Indolence is a delightful but distressing state; we must be doing something to be happy. Action is no less necessary than thought to the instinctive tendencies of the human frame.