In Search of Fragrance

They are born and there starts their search for the fragrance
They search for this fragrance every day.
They don’t know where it comes from but the scent is so irresistibly pleasant that they continue to seek the source all day.
Sadly they all do this, throughout their life and till that day they say bye
They all depart this world, without knowing the cause and root where this fragrance originates from.

They are called Musk Deer or otherwise called Kasturi Mrug found in the Himalayas. The pleasant fragrance is nothing but a god-gifted scent called Kasturi that emanates from its own belly, which they do not know their entire life. Oh God! What a sad state!

Searching something outside when it is there within……
(And yes, they are mentioned in many literary classics with a philosophical tinge about mankind in search of god) 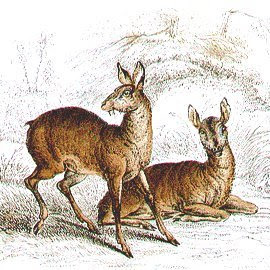 Now a few facts and figures

Geographically, it formerly existed throughout the entire Himalayan upper forest region, and was found in the scrub level between 2,200m and 4,300m

Sadly the Musk deer (Moschus chrysogaster) is fast vanishing from the Himalayas.

About 4,000 adult male deer are killed annually, due to their high demand in the international market

The musk is used for medicine purposes

The Himalayan musk deer is likely to disappear forever, because the demand for musk deer is high in the international market, particularly in Japan and the price of a musk is US dollar 5,000 per kilo

Trade-wise, Japan, more than any other nation, has the dubious distinction of accelerating the likely extinction of the Himalayan musk deer.

Regret that poaching and smuggling of musk are unchecked and uncontrolled in this region!
Posted by Greener Bangalore at 7:19 PM 8 comments

A wonderful video sent to me by a friend. By thinking positive, our entire life can make a difference in the right direction and in everything we say and do.....Positive thoughts make positive changes in one and thereby see a positive change in the world; and to make the world a better place. And this VDO shows the sensible face of Will which many of us are not aware of.
Posted by Greener Bangalore at 12:32 PM 6 comments

Email ThisBlogThis!Share to TwitterShare to FacebookShare to Pinterest
Labels: Bangalore, India, Law of Attraction, Will Smith 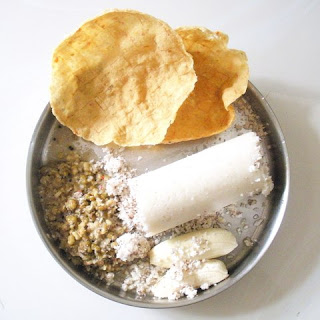 Puttu is a very tasty and tummy filling breakfast from Kerala. Made out of rice flour, it is cooked with the help of a Puttu maker. Puttu maker is a steamer which is cylindrical in shape. Instant puttu mix is also available these days. The more the coconut is used the more tastier. Puttu goes well with kadala curry as its side dish.

1.Soak the rice for three hours.
And leave it in a strainer and let it drain or if u have a thin cloth spread the rice in it or spread it in a plate.
3.When it’s dry grind them in a mixer to get fine flour.
4.Heat the powder in a pan for 5 minutes and keep stirring it while it’s heating.
5.Cool the fried powder.
6.Now add salt in some boiled water.
7.Sprinkle this water into the rice powder and gently fold the rice (don’t add lots of water).
8.Make sure the rice is in powder form and not in dough .
9.Now steam the rice flour in idli cooker ( put a thin muslin cloth in the idli cooker plate and put the rice flour in it).or you can use puttumaker instead of idli plates.
10.After that its done remove from heat and transfer it to a bowl.
11.Add sugar, shredded coconut and elachi/cardamom powder and mix it well.
12.Now!!! Get ready to gulp;)…….Serve it hot……

Serve with Kadala curry, Pappad, Cooked green gram, Banana and Sugar (and in the above picture, it is payaru curry and not kadala curry)
Enjoy ;-) 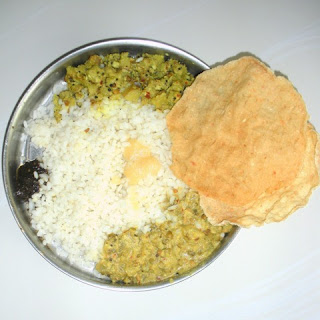 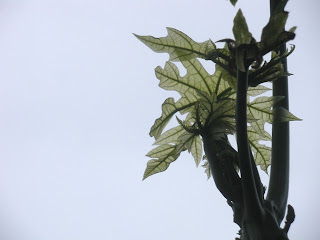 They are not just the 'veins' of papaya leafs, but of mother earth too. And hence, the clean sky high above and pure air all around... 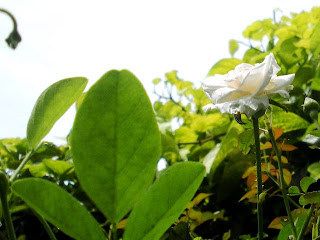 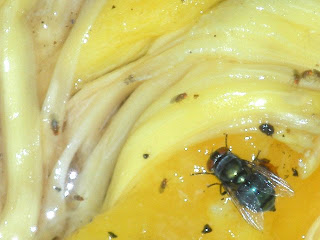 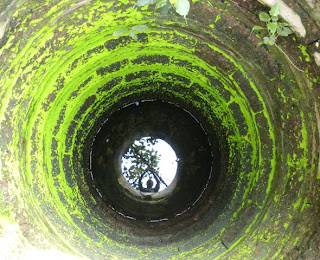 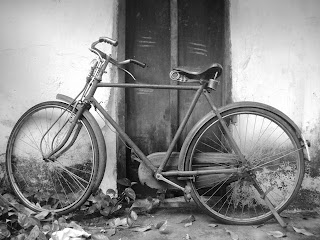 My old cycle in the backyard still standing tall ;-) 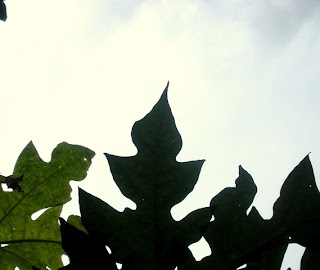 Can u see a lamp somewhere there ?? 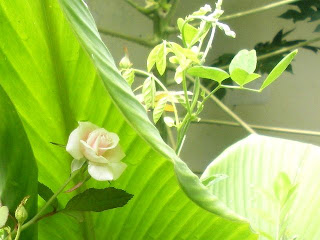 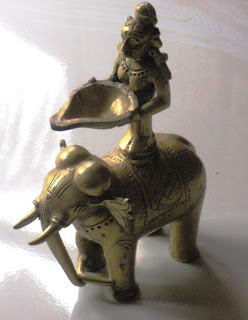 This is called Elephant lamp; made out of bronze, a pretty old 'treasure' which Ma preserves :) 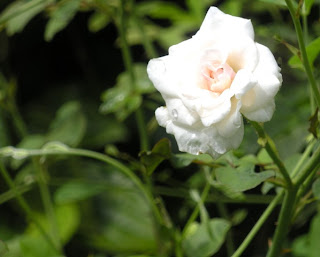 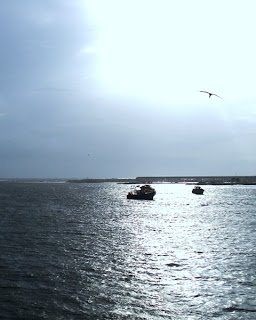 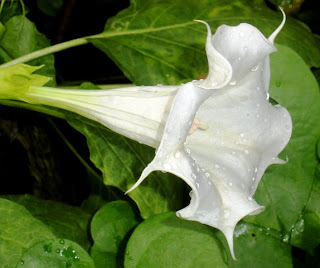 Vedic Perspective On The Environment - by K.N.Sharma

The World Environment Day theme this year exhorts people to help combat climate change for our collective survival. It is interesting to know that the ancient Vedas have several references in them on environmental protection, ecological balance, weather cycles, rainfall phenomena, hydrologic cycle, and related subjects that directly indicate the high level of awareness of the seers and people of that time.

Ancient treasures of vast knowledge reveal a full cognizance of the undesirable effects of environmental degradation, whether caused by natural factors or human activities. The protection of the environment was understood to be closely related to the protection of the dyaus or heavens and prithvi or earth. Between these two lies the atmosphere and the environment that we refer to as the paryavaran. Many of the Rig Vedic hymns therefore vividly describe the Dyava Prithvi – that is, they describe Heaven and Earth together.

The Rig Veda venerates deities like Mitra, Varuna, Indra, Maruts and Aditya, that are responsible for maintaining the requisite balance in the functioning of all entities of Nature whether the mountains, lakes, heaven and earth, the forests or the waters. Seers recognised that changes caused due to indiscreet human activities could result in imbalances in seasons, rainfall patterns, crops and atmosphere and degrade the quality of water, air, and earth resources.

There are many hymns seeking the blessings of the five basic gross elements or the pancha mahabhoota of Nature: akashor firmament, vayu or air, agni, tejas or fire, apah or water, and prithvi or earth. People were careful to refrain from activities that could cause harm to Nature’s bounties. It was understood that the wellbeing of Mother Earth depended on the preservation and sustenance of the environment. For any inadvertent action leading to earth’s excessive exploitation the seers prayed for forgiveness – “Whatever I dig from thee, O Earth, may that have quick recovery again. O purifier, may we not injure thy vitals or thy heart”. The seers of Rig Veda speak on behalf of earth for its principle of replenishment – “You give me and I give you”.

The Rig Veda makes a clear reference to the presence of a protective layer – which we know now to be the ozone layer – that filters the harmful rays of the sun and protects the earth and praises the radiation that enters the atmosphere that is responsible for the health of the environment. In a hymn of the Rig Veda the seer prays to the Ashvins for their indulgence for protection against any excessive solar flares that also affect earth’s temperature.

All four major Vedas – the Rig, Sama, Yajur and Atharva Vedas – recognise the importance of maintenance of the seasons’ cycles that are likely to get altered due to the climate change owing to inappropriate human actions. It is remarkable that the people in Vedic times regarded Nature and the environment in a holistic manner and revered each of its constituents and entities by carefully preserving them. “Do not harm the environment; do not harm the water and the flora; earth is my mother, I am her son; may the waters remain fresh, do not harm the waters… Tranquillity be to the atmosphere, to the earth, to the waters, to the crops and vegetation.” This Vedic prayer invokes divine intervention to bless and protect the environment.

A beautiful article by K.N.Sharma which is published by TOI.

As usual, TOI continues their success story in finding out the gems for their Editorial contents. Kudos to both TOI and K.N.Sharma
Posted by Greener Bangalore at 9:52 AM 5 comments 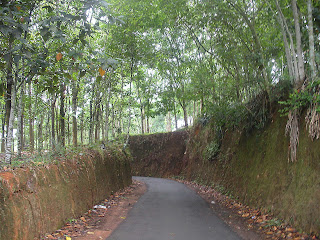 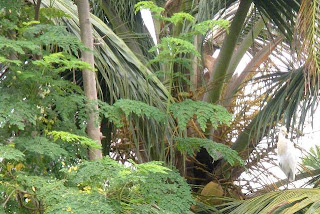 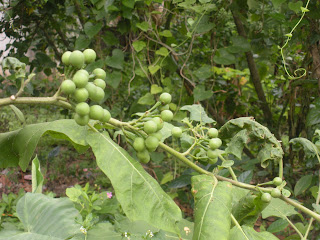 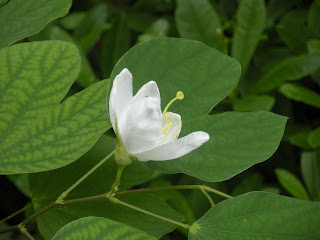 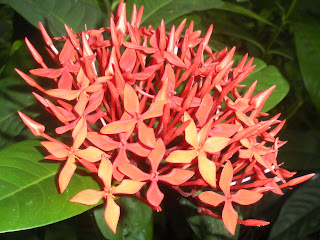 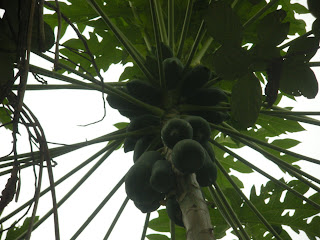 Posted by Greener Bangalore at 9:25 AM 11 comments

Email ThisBlogThis!Share to TwitterShare to FacebookShare to Pinterest
Labels: photos
Newer Posts Older Posts Home
Subscribe to: Posts (Atom)
Indolence is a delightful but distressing state; we must be doing something to be happy. Action is no less necessary than thought to the instinctive tendencies of the human frame.